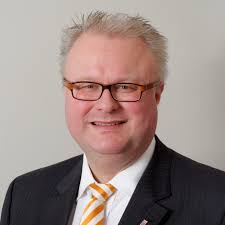 You thought 2020 was already going on as the worst year?It seems like it’s not done yet.

2020 is a year that keeps on giving, but in this case, it keeps on taking.
Coronavirus has hit the global economy and has already helped the oncoming recession appear faster, that’s no secret.
However, businesses and common men are not the only ones hit with stress; of course, the stress bows down to the people in charge too.
According to the latest reports, Thomas Schaefer, the finance minister of Germany’s Hesse state, which includes Frankfurt, found dead near a railway track.

The mentioned politician left a suicide note before he did the unthinkable, as reported by the German daily Frankfurter Allgemeine Zeitung.
He also addressed the media regularly during the tough Coronavirus Crisis.
As he was a member of Chancellor Angela Merkel’s centre-right Christian Democrats (CDU). Mr Allgemeine Zeitung been active in Hessian state politics for more than two decades and was a finance minister for almost ten years.

Mr Bouffier, who is also a politician at CDU, mentioned that he had received the news with “sadness and disbelief.”
Bouffier also made the statement that “His main concern was whether he could manage to fulfil the huge expectations of the population, especially in terms of financial aid,” Bouffier said on Sunday. “He clearly couldn’t see any way out. He was desperate, and so he left us. That has shocked us, has shocked me.”
He also added “Our sincere condolences go to his closest relatives,”

The International Labour Organization (ILO) mentioned that around 25 million jobs could be lost worldwide, which can lead to shuttering the global economy. Compared to it, the 2008-2009 recession caused the unemployment to peak by 22 million, as most of us stay at home in the worldwide Coronavirus pandemic

The UN body, however, mentioned it on a lower scale of around 5.3 million if the economic situation is contained, which was caused by the Coronavirus.

Germany’s influential Ifo think tank’s reports a partial economic shutdown could lead to a loss in between 7.25 and 20.6% of GDP, which is based on a range of estimates and assumed partial shutdowns range from one to three months in length.

“The costs are likely to exceed anything Germany has experienced in recent decades as a result of economic crises or natural disasters,” President of Ifo, Clemens Fuest, said. “The crisis will also cause massive upheaval in the job market. This could put the situation at the high point of the financial crisis into the shadows.” He also mentioned.

So, by reading this article, we are sure that you have also predicted by now that 2020 is going to be a very tough year for everybody all around the world.We understand you must be scared too, and it’s okay to be scared.
But “with down, there’s always a place for ups.”
Next, some months are gonna be tough all around the world,so keep your savings ready and hope for the ups to come soon.